What are Your Rights if You’re Pulled Over for a DUI? 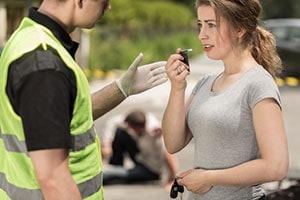 Let us paint a picture for you:

It’s been a long day at work, so you head out for happy hour with co-workers at the end of the day. When you’re heading home later, your phone starts to ring. Worrying it might be one of your kids, you fumble to answer it and miss a stop sign.

Moments later, you see the lights behind you and pull over, unaware of what’s about to happen. You sit through the officer’s explanation of your infraction and then hear the words you’ve been fearing –

“Excuse me, ma’am, have you been drinking this evening?”

Cops aren’t concerned with the who’s, what’s, when’s, and why’s. All they care about is the fact that you have been drinking and are now behind the wheel. Whether you’re in complete control or not, it’s important to understand what happens next.

The Manatee County DUI attorneys at Flynn Law understand your rights as a motorist. In the unfortunate event that you’re pulled over after drinking, here’s what you should know.

Can I Refuse a Field Sobriety Test?

If an individual has been drinking and is pulled over for a possible DUI, they often think of field sobriety exercises (FSE) as a way of proving they’re not intoxicated.

They often believe that if they “pass the tests” they will be back in the car and on their way home. Unfortunately, however, this is not the case.

When an officer asks you to participate in FSE, they already have probable cause to back up a DUI charge. FSE then become a way for that officer to collect more evidence against you.

During an FSE, you will be asked to perform a variety of physical movements, such as:

Given the officer already believes you’ve been drinking, and the tests are based on his/her judgment, there is a likely chance you won’t pass. Especially since additional factors like uneven pavement, weather, and lighting are not taken into consideration.

If you’re asked to participate in FSE, the best response is to respectfully decline since you have no legal obligation to do so.

To Blow or not Blow - Can I Refuse a Breathalyzer Test in Florida?

Despite our suggestion to refuse field sobriety tests, if you’re pulled over in the Manatee County area, you are legally required to consent to a breathalyzer test when asked to do so.

Based on Florida Statute 316.1932, or the “Implied Consent Law,” any individual with the privilege of being a licensed Florida driver, is consenting to:

Whether it be a breathalyzer, blood, or urine test, you are required by law to cooperate when asked to participate.

Failure to consent will result in a mandatory license suspension for a period of up to one year. If your case goes to court, refusal may also increase the level of probable consequences.

Even with a failed breathalyzer test, there are still ways for you to win your case or lessen the penalties.

The one exception to this rule is if your DUI arrest is considered unlawful. If you are pulled over without any probable cause, a refusal to blow can’t be used against you.

A Manatee County DUI Attorney can Help Your Situation

Let’s look back to the example at the beginning of this page – do you want to spend up to six months in jail and pay a $500 fine for two glasses of wine after work?

When you get pulled over by a cop and are accused of drinking, know your rights and consider hiring an experienced Florida DUI attorney.

The lawyers at Flynn Law of Bradenton are here to help.